The Masgalano is the prize that in the city of Siena assigns to the Contrada whose appearance appears to be the best for elegance, dignity of posture and coordination during both historical parades preceding the Palio.

The name is a derivation from the Spanish mas (more), and gallant (smart). Traditionally the price is a silver platter embossed, or a basin, but nowadays could turn into a real silver sculpture.

It is awarded by a jury made up of two representatives from each of the 17 Contrade and gathered in a Committee of "Amici del Palio" (Friends of the Palio). Each Contrada annually appoint their own representatives.

This year Istrice wins this prestigious Masgalano price, a good news for the contrada who saw her enemy win twice the Palio, a so called Cappotto victory.

Torre and Selva get the Palio 2015

The Palio movie, a perfect introduction! 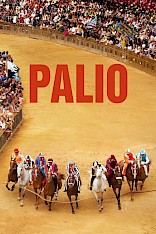 The Palio documentary movie introduces you to the complexity of the race... Which is not really (only) a horse race!

After waiting for long  27 years, Lupa triumphs in 2016 with both Palii, what a great celebration for Lupa!